Hosted by Jane Pauley, this two part NBC Entertainment special featured never-before-heard audio tapes that Princess Diana secretly recorded which were the basis of the 1992 Andrew Morton book that exposed the turmoil of her marriage to Prince Charles.

The book triggered a chain of events that ultimately lead to the end of the fairly-tale marriage.  The TV event was the 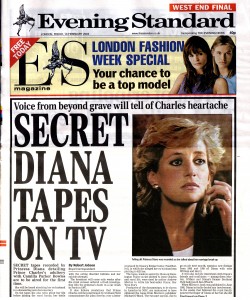 World’s first chance to hear Diane’s account, in her own voice, of her life before becoming princess, her struggle with bulimia, her suicide attempts, her heartache over her husband’s infidelity, and her strained relationship with the Royal family.  The special also included exclusive video footage of Diana working with a speech coach talking casual, practicing speeches and conducting mock interviews.

Executive Produced and Directed by Jason Raff, the special was seen by over 17 million viewers, and each airing won the night in the 18-49 demographic and made headlines around the world.