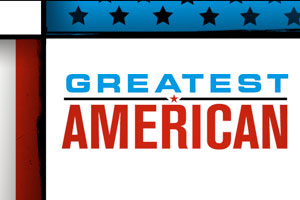 The Greatest American executive produced by Jason Raff and NBC’s New’s Peacock Productions. It was a four-part interactive television event hosted by Matt Lauer that aired on the for the Discovery Channel in 2005.

After tallying more than half a million online nominations, Discovery Channel and interactive partner America Online unveiled the list of the top 100 nominees. Ranging from inventors to athletes, politicians to musicians, the list takes the pulse of the nation and reveals the qualities we most admire. (The full list is attached.

Beginning June 5, 2005 and airing every Sunday in June, GREATEST AMERICAN presented the top 100 nominees. At the end of the premiere episode, Lauer announced the top 25 great American nominees based on nominations held earlier in the year. America then voted on their favorites.

In the second episode, Matt Lauer and influential actors, comedians, politicians,  athletes, and pundits offered insights on the top 25 to aid America in another round of voting that determines the top five. The third episode pitted celebrity advocates against one another, debating the virtues of their “Greatest American.” The seven-hour series culminates in real-time election-style voting, as America selects one person to be named the “Greatest American.” The grand finale was televised live from New York City on Sunday, June 26, 2005.